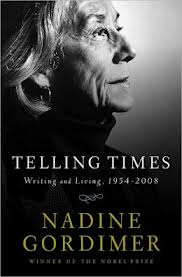 Usually Nadine Gordimer's writing makes me feel inadequate.  I will never be able to write like her, not in a hundred years, not in a millennium.  Sad sigh, and maybe some mild inner resistance next time I'm to pick up a pen and string some words together.  I write my piece anyway, punctured ambition healing with time and a dose of rational thinking:  if all scribblers gave up on realising they can't achieve Nobel-deserving greatness, we would now have very few books indeed.

This time was different.  Yes, as I struggled through Telling Times, the usual 'I'll never...' did cross my mind but, for the first time, it was followed by the merciless 'nor would I want to'.  This is not to diminish Nadine Gordimer's mastery of words, depth of analysis (whatever is being analysed), fieriness of emotion, erudition etc. etc.  She's got all these, she deserves her Nobel and any other literary praise anyone wants to claim for her.  It's just that suddenly I realised that Gordimer's style of writing is slowly becoming dated.  Not relevant anymore, certainly not relevant to me.

Why so harsh a verdict?  To answer that, a closer look at Gordimer's range of subjects is necessary.

Apartheid is an ever-present spectre in nearly all of her essays.  To say that, being a thing of the past, it is not relevant anymore would be at best simplistic if not outright stupid.  As a species, we don't seem to learn from our mistakes but if remembering past monstrosities improves our chances of avoiding repetition even slightly, then cultivation of those memories is worthwhile.  No, apartheid's constant presence in Gordimer's writing is not why I question her relevance.

Nor do I have any misgivings about her (too scarce!) travel pieces.  Inevitably tinged with politics - it appears that activism follows you wherever you go - and rather conservative when it comes to where and how, they are little gems of wordsmithing nevertheless.

The third major theme in Gordimer's non-fiction is literary theory and here's where my doubts surface.  The reviews, the musings, the analyses are all very learned and impressive ('I'll never...'), but what is their function?  What, when you get right down to it, is the use of literary theory, especially today?  Will it teach writers how to write?  I don't think so.  Will it teach readers how to read?  'What is the poet trying to say?' is a question that could and should be answered only by the poet him/herself.  Anyone else's attempts smack too much of systemic education that manufactures automatons instead of freethinking individuals.

Or such, at least, is my belief.

To tell you the truth, I found Telling Times tedious.  I say that with a touch of sadness because I generally consider Gordimer a great writer.  Even in the most 'irrelevant' essays I was able to find fragments full of visionary insight, simply begging to be turned into a motto for some future opus magnum.

The book's format is not particularly fortunate.  At first, 700+ pages of Nadine Gordimer's non-fiction seems like a literary feast but once you've put a course or two behind you, you realise that the tastes are disappointingly familiar.  If you've read The Essential Gesture and Living in Hope and History (I have!), the disappointment is almost guaranteed.  I don't have the two books on hand to compare the contents in detail, but I'm sure most (if not all) of the material is simply re-printed from earlier collections, with few extras added.  Gordimer is a writer worth re-reading and Telling Times never claims to be fresh and new but... consider yourself warned.
Posted by Bookworm at 02:46