Terry Pratchett, A Blink of the Screen 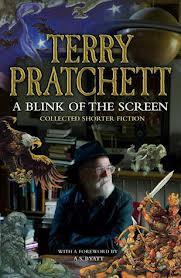 I tend to buy Terry Pratchett's books on sight.  In most cases, I am also well aware where and when they can be sighted, anticipating each release with itchy impatience.  I knew of A Blink of the Screen long before it hit the shelves sometime last autumn and yet I let this one pass.

To tell you the truth and despite all the adoration I have for the author, I thought the book was a typical money-spinner. You know, re-hashed material that you've already read somewhere else, new fancy cover and high price tag.  To a degree, it's true.  The stories are not new, oh no, but still A Blink of the Screen was a pleasure to read, for three reasons.

One, Pratchett is simply a damn good writer, ok?  I consider him a first-class wordsmith, unable of releasing bad literature on people.

The book is divided into two sections, Discworld and non-Discworld. To my astonishment I enjoyed the latter more.  Well, ok, maybe it's not that surprising, I have read most of the Discworld stuff before, I think every Pratchett fan has.  It's just that I usually lose interest as soon as the author gets off his trademark creation, and this time my attention remained fixed on the text.  Must be due to point one on the list above...

I still wouldn't buy the book (lucky me, with a few well-stocked libraries nearby), but I'm guessing that the collectors among Pratchett fans would, happily.  After all, it's a lifetime's worth of short stories.  Handy to have them collected in one pretty volume.
Posted by Bookworm at 13:02