Dervla Murphy, In Ethiopia With a Mule 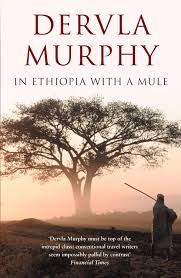 I seem to have a thing about Ethiopia recently.  Wherever I turn, there it is.  Feature article on my favourite news website.  Bumper sticker declaring someone's love for the place.  Books, chosen randomly but inevitably converging on the African nation.  The Prester Quest, reviewed recently.  Ryszard Kapuscinski's The Emperor (review coming soon!).  Dervla Murphy's In Ethiopia With a Mule.

I almost feel stalked (can one be stalked by a country, I wonder?).

In Ethiopia With a Mule is a diary of her first African journey - at least the first she wrote about - undertaken in 1966.  Those were the days of emperor Haile Sellasie, he of the Rastafari fame.  Eritrea was still a part of the country.  I'm mentioning this only because some of the terrain that Dervla journeyed through is not Ethiopian anymore.

Murphy's courageous attitude is visible from the first pages of the book.  Despite numerous warnings about bandit activity on the chosen route, she kept evading any official escort as often as she could, convinced that a retinue would negatively impact on her relations with local populace.  A few minor and one major incidents did take place.  Dervla's description of the 'serious' encounter with thieves sounds pretty innocent right after the fact, but she often referred to this situation later in life as one of the few really dangerous ones that she faced.

Bandits aside, Ethiopia in the sixties was a demanding country.  Rough terrain, maps bad or non-existent, little food and water, extremes of temperature and insect life turning night time into hell.  To balance it all, it also offered unequalled natural beauty, kind hospitality of the Ethiopians, blissful solitude and physical challenges, both of which Dervla greatly appreciates.