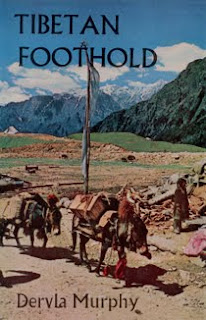 Some time ago I realised that I had got as far as I could get on my own in the quest to track all Dervla Murphy books.  It was time to enlist a librarian's help.

Most librarians in my local book source are sweet, friendly and helpful, but one or two individuals can only be described as intimidating.  Just my luck that I chanced upon a gentleman of the latter kind when I finally got down to serious hunting business...  It took some courage and no small amount of patience, but Dervla Murphy is worth surviving any amount of grumpiness.  To be fair, I got my books and quickly, too - yipee!

I'm working through the list chronologically, so the three titles I've checked out so far are all from the sixties.  Today's book, Tibetan Foothold, was published directly after Murphy's debut, Full Tilt, and it is really the second chapter of the same journey.

Let me explain.  After the famous cycling expedition from Ireland to India, Dervla found herself in Delhi with much time to spare and the weather too hot to cycle.  She needed somewhere to bunk over until colder part of the year and she chose to fill the gap by doing some volunteer charity work.  Those days India was swarming with refugees from Tibet and Dervla was sent to a nursery for Tibetan children in Dharamsala.

In contrast to other Murphy travel memoirs, Tibetan Foothold is almost stationary.  Sure, the itching feet took the tireless adventurer on quick treks whenever she could get away from care giving duties, but most of the book was written in the nursery where she worked.  That doesn't mean that the result is in any way inferior to other titles in Dervla's bibliography.  Just the opposite:  it is as fascinating as her most daring expeditions.  Clearly it is the case of beauty in the eye of a beholder...  or huge, huge writing talent.

I couldn't shake the feeling that Dharamsala experiences influenced Dervla for life.  The girl full tilting from Europe to Asia was curious and eager for an adventure, but only in Tibetan Foothold one can observe the emergence of humanitarian activism that became Murphy's trademark later on.  Of course, you'd need to ask the author herself to see if I'm right, but of one thing I am sure:  Dervla Murphy's conscience was alive and kicking almost from the beginning of her writing career.  This is probably the single most vivid detail distinguishing her from other writers:  she cares.  I'm usually sceptical when I stumble against too loudly expressed compassion, but in this case I am convinced.  Murphy is simply too human, too real in her reactions to possibly fake it.  She gets angry, muddles things, doubts, makes mistakes - in short, she's as far from pink-bubblegum-perfect as it is possible to be.  I'm convinced.

Then again, I've been under a spell since the first encounter with Dervla.