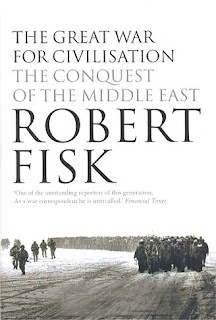 I first heard of Robert Fisk's The Great War For Civilisation through a youtube book recommendation video by Henry Rollins.  Not that I'm any particular fan of the guy - in fact, I landed on the video page when I tried to find out who he is after someone mentioned his name.  But hey, random books can be fun and the word 'civilisation' in the title usually bodes well.  When I saw Fisk's name on the library shelf, I went for it.  What the hell.

To tell you the truth, I expected the usual gibberish along the lines of 'us - good, them - bad, bad terrorists'.  My goodness, I couldn't possibly have been further off the mark!  The Great War For Civilisation is the very opposite of propaganda rubbish.  It does concern the East/West conflicts, yes, but it's humanitarian rather than political.

Robert Fisk has been a Middle East correspondent for decades.  He's based in Lebanon, but travels widely in search of stories.  The Great War For Civilisation is part war reporting and part history, with tiny elements of autobiography and philosophical reflection.  A delicious mixture, especially that Fisk, unlike statesmen of today, appears to be an admirably sane man.

The book unravels all the twists and turns of recent history of the Middle East.  It explains most of the major conflicts, many of which were witnessed by the author.  Russia-Afghanistan, Iran-Iraq, Israel-Palestine, the infamous 'war on terror' of recent years, they are all there.

Seen up close, all wars are terrible.  That's the main message of the book, and Fisk's amazing gift of storytelling leaves you with a feeling that you've actually witnessed the atrocities yourself.  The Great War For Civilisation is not a title for the faint-hearted!  The only negative thing that I can say about the book is that after a few hundred pages, I felt physically sick, overwhelmed by all the cruelty and hypocrisy that our species habitually presents.  If there's a villain in The Great War For Civilisation, it is not a 'terrorist', but a politician.  Nauseated, depressed - that's what I was when I read about fat cats turning people into pawns in the struggle for power and oil.  Unbelievable.  Shocking.  And yet...  strangely more convincing than gutless newspaper headlines.

This is a book that kicks you right in the teeth and leaves you gasping for breath.  THIS is what our world is like.  THIS is what we allowed, and still allow, to happen.  If THIS is civilisation, then I'm ashamed to be a part of it.