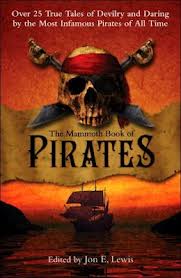 I've been looking for a good book about pirates for quite a while now.  Some time ago, hoping to jump on a gravy train launched by Pirates of The Caribbean, I wrote an article about some of the most famous historical sea bandits (check it out here - it's actually quite good, if I say so myself) and ever since I was looking for titles that would nicely illustrate my story there.  With The Mammoth Book of Pirates I pretty much hit the bull's-eye.

When it comes to the size, this volume is indeed substantial (although if you want to see a real monster of a book, come back in a week or two:  I'm currently digesting a true Leviathan of the literary world and I'll review it here once I'm done).  Its 400+ pages are filled with factual accounts of pirate adventures, written by witnesses, pirate hunters or even, in few cases, pirates themselves.  We're talking the 'golden age of piracy' here, 16th-18th centuries, but there's no need to fear the old-fashioned language;  whether the editor smoothed the narratives out or English of three hundred years ago is not as scary as it sounds, the stories are actually quite readable.  Well, ok, storytelling talent varies from tale to tale but the majority is very good.

The eyewitness accounts are enriched with bits and pieces of information from other sources.  There are pirate songs and poems (even one by Byron, he of the Romantic greatness), excerpts from marine law concerning sea banditry, definitions of different piratical terms and other knowledge scraps of the sort.  All in all, it is a fairly reliable and rich treasure chest of pirate lore.

Admittedly, real life pirates were far less glamorous than their Hollywood images.  No big surprise there...  If you're looking for a Jack Sparrow, you'll be better off sticking to the movies.  If, on the other hand, you happen to be interested in flesh and bone individuals who actually roamed the seas many years ago and inspired the cinematic productions, then The Mammoth Book of Pirates should leave you satisfied.
Posted by Bookworm at 16:43