Dervla Murphy, The Waiting Land - A Spell in Nepal 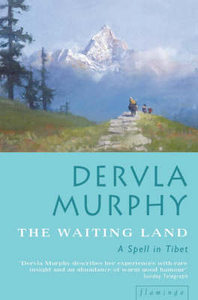 In 1965 Dervla Murphy spent seven months in Nepal, a mountainous kingdom in the Himalayas.  The record of her adventures was published soon afterwards as The Waiting Land - A Spell in Nepal.

Quite a spell!  Visions conjured by Murphy's pen are enchanting indeed.  Festivals brimming with colours.  Majestic mountains and exotic wildlife.  The Nepalese, with their curious traditions and habits.  Joys and sorrows of rough travel through a country that only a few years previous had begun its journey towards modernity.

Once again (see Tibetan Foothold) Tibet and Tibetans feature largely in the book.  Major part of Dervla's stay was spent working in a Tibetan refugee camp.  The mixture of nationalities one encounters in The Waiting Land is actually quite dazzling:  various indigenous tribes are spiced with the citizens of China, India and divers 'first world' countries.  There is no one like Dervla Murphy to observe the quirks and peculiarities of mixing cultures so anyone interested in sociology is in for quite a treat.

The book does read a bit like a history textbook.  No, don't run, I don't mean to say that it's full of boring academese, The Waiting Land is totally readable.  It's just that plenty of water has passed under the bridge since 1965 and a lot has changed in Nepal.  It's not a kingdom anymore, to name the first shift springing to mind, but I'm sure the transformation goes much deeper.  Dervla provides a good amount of background information AD 1965, so if you happen to know something about Nepal as it is today (I don't!), you'll be able to appreciate the difference.

To tell you the truth, I'm slowly running out of ideas for creative and original praising of Murphy's writing.  Perhaps the best way to communicate my admiration is this:  The Waiting Land is the 17th book of the author that I've read recently and I still haven't had enough.  One can hardly expect more.