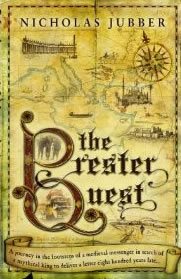 In the 12th century a supposed letter from Prester John reached the court of Manuel Comnenos, Byzantine emperor.  The (then) Pope, Alexander III, took it upon himself to reply, sending the return message with his physician, Master Philip of Venice.  Since postal service was pretty unreliable in those days (read: non-existent) and the addressee elusive, the simple act of delivering a letter was synonymous with a long and perilous journey:  from Venice, through Turkey, Middle East, Egypt and Sudan, all the way to Ethiopia.

If the story of Prester John sounds incomprehensible, rest assured - by the end of the book you will know all there is to know about the mythical priest-king.  The Prester Quest is half a history tale, half travel writing, with the two journeys unfolding side by side in front of the reader's eyes.

Considering that The Prester Quest is Jubber's first book, it is quite a remarkable achievement.  The author shows off with flashing linguistic pyrotechnics.  The story is dynamic and entertaining, good-humoured auto-irony showing all the way through.  I'll hazard a prediction that if Jubber sticks to his travel writing career, he'll be a solid performer within the genre a few years from now, once some maturity is added to his impressive language skills.

I confess that my mind kept drifting off the text and it took me a good while to get through the book, but it might be due to my own lack of concentration rather than the title's shortcomings.  Summer has come to Ireland, an occurrence unusual enough to make us all slightly light-headed.